Mother Nature offers an astonishing gift the week between Christmas and New Year’s. That’s when more than 18,000 gray whales cruise down the Oregon Coast to their winter migration destination, the lagoons of Baja, Mexico.

Trained volunteers are present at 24 parks and viewpoints along the 365-mile coast, offering watching tips and excellent information about these remarkable marine mammals. The state parks department designates these locations as “Whale Watching Spoken Here” sites. The winter (southbound) migration sees the highest concentration of whales—about 30 an hour, and though many of them are out about three to five miles form shore, enough pass close enough to stir excitement and wonder.

The Whale Watching Center in Depoe Bay is a great place to stop in for information and spotting advice. It’s open 10 – 4 September to May. Whale watchers are encouraged to report their sightings; the numbers and locations are collected and posted during and after each season. During the 2011 winter migrations, top watching spots included Cape Meares, Cape Ferreio, and Boiler Bay.

Posted by Rodica at 6:56 PM No comments:


In the “all-things-being-connected” category... the fiscal cliff crises means our beloved national parks are facing big cuts in funding and fewer American may have less money to travel if taxes are increased—which, in turn means towns and communities will also suffer from lack of revenue generated from park visitors.

The National Park Service is looking at an automatic 8.2 percent cut in government support—$218 million across the country. To put that figure in perspective, it’s the amount of money the agency spends at the 150 smallest national parks, among them the Northwest’s Klondike Gold Rush National Historical Park, San Juan Island National Historical Park, Fort Vancouver, and Lake Roosevelt National Recreation Area.

Mount Rainier has a current annual operating budget of $11.7 million, down $500,000 over the past couple of years. Small changes, like closing the road from Longmire to Paradise on Tuesdays and Wednesdays, save money by cutting back on snow removal—because there’s not enough money for the crews.

... The advocacy group, the National Parks Conservation Association, points out that the budget for our National Park Service is one-fourteenth of one percent of the federal budget. It begs the question then as to how much will it actually help the deficit vs. how much will it hurt those of us (and our “guests” from other countries) to be denied access to our treasured, last protected wild spaces? Stay tuned...
Posted by Rodica at 8:03 PM No comments:

Park Manager Jon Crimmins is quoted in the news article saying he came face to face with the two dogs late Tuesday afternoon and the dogs that looked like pitbulls were incredibly aggressive.

KIRO reported that Crimmins and his partner returned Wednesday morning with an animal control officer to search for the dogs, but haven't found any sign of them.

The park website had this closure listed on its website Thursday afternoon: Fort Ebey State Park is closed until further notice. Aggressive, unattended dogs were discovered at the park the evening of Dec. 11. At this time, rangers and county animal control officers are working to confirm the location of the dogs and place them under control. Until this occurs, the park will remain closed.


To read the complete report from KIRO Seattle, click here.

Thanks to RVdailyReport.com for alerting us to this story.

The December holiday season in the Pacific Northwest is pretty hard to beat and some of the most out of the way places put on the most spectacular holiday displays. Like Coeur d’Alene, Idaho for instance... 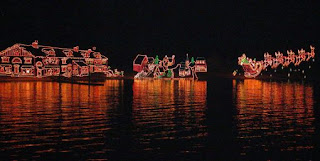 Sitting along a lake that National Geographic has named one of the most beautiful in the world and surrounded by rugged Idaho wilderness, it’s the little city of Coeur d’Alene that throws the switch on the largest on-the-water light show in America! More than 1.5 million lights and 250 displays sparkle along the waterfront. Take a Lake Cruise for a magical experience and the best views (and photos).

Santa’s working hard at the North Pole and waiting for the kids, grandkids, and your inner child, to travel across the water by boat to visit. This year, the Workshop is crowned by the World’s Tallest Living Animated Christmas Tree, aglow with 30,000 lights. Don’t tell anyone, but it’s twice as tall as New York’s famous Rockefeller Center’s Christmas tree!

Coeur d’Alene makes for a fun and festive December RV destination and several RV parks and resorts are open year-round, offering with all the comforts of home away from home. Among them:

The Holiday Light Show displays are illuminated until January 1, 2013. For more information, click here.
Posted by Rodica at 7:49 PM No comments: 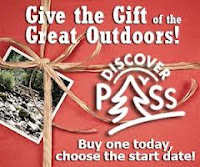 Good news for Washington park visitors in the coming year! Now you can choose the start date of the annual Discover Pass, which is required on all motor vehicles, including RVs, entering recreation lands managed by the state.

In an effort to support the ongoing operation of recreation lands, Washington State has been considering a variety of creative options. The "choose your date" option proposal was passed in 2012 and takes effect immediately. Those who enjoy giving recreation-related gifts to friends and family will now have the opportunity to do, starting with this December holiday season—and for any occasion in the new year. The pass is valid for one year from the date specified at purchase.

To purchase your Discover Pass online and select the “choose your date” option, click here.

Or, purchase the Pass from retail vendors who sell the licenses. A complete list can be found on the state Department of Fish and Wildlife website. Click here.
Posted by Rodica at 9:20 AM No comments: