Oregon's newest state park, was dedicated only weeks ago. But the party may already over--for the season at least--as the cold weather sweeping through the Blue Mountains is making Bates State Park a little less than desirable.

Bates is the first state park in the system east of the Cascades in three decades. It's not huge, scaling in at only 131 acres, but it is far from the crowds, and near some nice fishing, sitting alongside the middle fork of the John Day River.

Not considered a "destination" park, it's probably one that local RVers will l 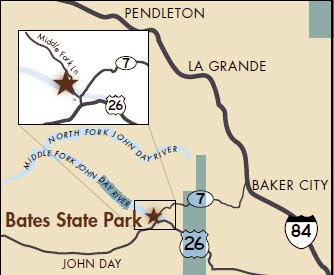 ove for just dropping in on the spur of the moment, or for travelers with rigs to "stumble on" when sight seeing. They'll find 34 camp sites, 28 of them suitable for fully self-contained RVs. The other six are set aside for bicyclists or hikers.

There's a bit of history here, too. Bates was once a company town supporting a lumber mill. From 1917 through the end of the 1960s, the mill thrived. In the hey-days, as many as 400 workers and their families lived in company-provided homes. Time and technology overtook the mill in the 1970s and it closed in 1975. The families vanished and the buildings were either moved or torn down.

Come October 31, another vanishing will take place. As the winter chill moves in, park officials will close down until next spring.

Posted by Russ and Tiña De Maris at 10:20 AM No comments: