A picturesque RV park along Washington's Columbia River is at the center of a firestorm between a local industrial firm suing port officials. Columbia Riverfront RV Park in Woodland, Washington touts its "900 feet of sandy beach," along the river, while an area mineral buying firm says the port sold that river access to the park for pennies on the dollar.

In a story carried by The Daily News Online, Columbia River Carbonates (CRC) claims the Port of Woodland failed to stand up for the public when it sold a 1.35 acre strip of river frontage to the park, allegedly at a quarter of its real market value. The company's complaint is not 100% altruistic, as CRC says in the suit that it had asked the Port to be notified when the property came up for bid. The outfit's attorney says no notification was ever made, and that the Port simply sold it outright to the RV park.

CRC's attorney, Charles Klinge told the newspaper, "As most of the public knows, you do that [sell public property] by holding a public bidding process, advertising the property for sale or listing the property with a real estate broker — you market the property to get the highest price to protect the taxpayers." None of this, alleges Klinge, was done. A port official told the news outlet that the port acted in good faith under the direction of its attorney. RV park representatives had no comment.

If the suit goes through as CRC hopes it will, the deal on those 900 sandy feet would be rescinded. The port has two weeks to respond to the lawsuit. A person answering the phone at Columbia Riverfront RV Park told an rvtravel.com editor that only the park's owners could comment on the issue; they won't be available until the end of the month.

Castle Rock State Park will be removed from the state's closure list. Under a deal reported by the San Jose Mercury News, the popular park, which sits atop the ridgeline of the Santa Cruz Mountains on the Santa Clara-Santa Cruz county line, will receive a $250,000 donation -- enough to keep it open for another year -- from the Sempervirens Fund, a nonprofit conservation group in Los Altos.

Along the crest of the Santa Cruz Mountains, Castle Rock State Park embraces coast redwood, Douglas-fir, and madrone forest, most of which has been left in its wild, natural state. Steep canyons are sprinkled with unusual rock formations that are popular with rock climbers. The forest here is lush and mossy, crisscrossed by 32 miles of hiking and horseback riding trails. These trails are part of an even more extensive trail system that links the Santa Clara and San Lorenzo valleys with Castle Rock State Park, Big Basin Redwoods State Park, and the Pacific Coast. Primitive campsites for backpackers are the only overnight facilities.

Specifics about Castle Rock staffing levels and operating hours are still being worked out between state officials and the Sempervirens Fund. But when finalized, the arrangement will bring to 10 the number of state parks saved from closure. Read the full article in the Mercury News.
Posted by Staff Report at 8:53 AM No comments:

The Washington State House and Senate have agreed on several amendments to last year’s Discover Pass requirement. The House approved the bill last week; the Senate approved it earlier. The legislation is now awaiting theGovernor's signature. The following are some highlights of this legislation.

The most significant change will be the transferability of the pass between two vehicles. New passes will have two lines for two license plate numbers. If you have a current pass, you will be able to write an additional license number on it. The pass may be used only with one vehicle at a time.

The Discover Pass in its original "one vehicle" version had flopped, in large part to its restriction to one vehicle.

•The new legislation also states that if your street-legal vehicle, such as a motorcycle, doesn’t have a windshield, then you must display the pass in a “prominent location.”

By the end of 2013, the three agencies responsible for implementing the Discover Pass must prepare a report to the legislature that identifies opportunities for simplifying the administration and use of the pass.

If the Governor signs the bill as is, as expected, the changes will go into effect immediately.
Posted by Staff Report at 8:10 AM No comments:

Oregon coast clean-up an "excuse" to hit the beach 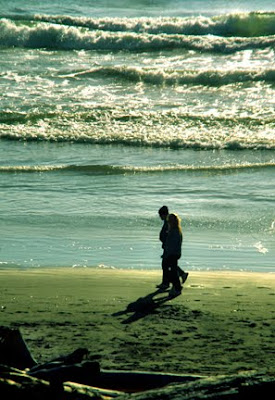 Late winter on the Pacific Northwest coast is a great experience. While the weather may be unpredictable, there's beauty in just about any sky, precipitous or otherwise. Walking a beach with a thundering ocean can put a real perspective on life. If you need an excuse to go, here's one: The annual Oregon Coast Spring Beach Cleanup.

This year the Oregon Coast Aquarium in Newport is the host outfit, but there'll be beach cleaning at 44 different sites along the entire coast. The big day is March 31, and the official cleanup runs from 10:00 in the morning to 1:00 in the afternoon. Captains at each location will hand out bags, gloves, and information on safe cleanup efforts.

The cleanup effort has been a regular even since the 1980s, and over the years organizers have developed plenty of tips to help make the job more effective, safe, and fun.

Bring an old colander to sift the tide lines for harmful, bite-sized bits of plastic

Carpool and use public transportation where possible

Plan ahead and pack a “trash-free” lunch

Steer clear of sea lions for your safety and your pets. Increasing numbers are reported to be infected with a harmful bacteria. To report stranded marine mammals call 1.800.452.7888.

Get more information on the program, see a map of the registration stations, or pre-register at www.solv.org.

Posted by Russ and Tiña De Maris at 7:00 AM No comments: