In Washington (the state) imagination may help keep parks open 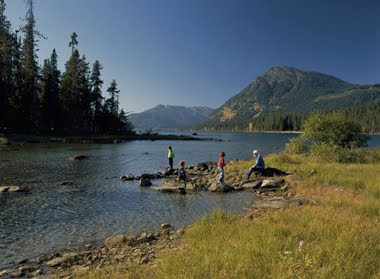 In Washington State, the legislature is mucking its way through another special session, attempting to deal with a multi-billion dollar cash shortfall. On the chopping block? State parks. It was no great news, as the park system had already been put on notice that they'd be knocked off state budget support in 2013.

Since that time, various funding "alternatives" have been floated. Forcing park visitors to buy an access pass was one of the "finger in the dike" ideas that leaked. First, state residents weren't too keen on buying a pass to get into a so-called publicly owned park. Then when they found the pass was good for only one vehicle, two (or more) car families got sore.

The "Discover Pass" plan is far from going like a house afire. Sales of the pass are far, far less than imagined, and certainly far from taking care of the parks' needs. Now with the legislature back in Olympia, scuttlebutt has it the lawmakers may move to allow the Discover Pass to be used in more one car. It may help, but as a for-sure life support method, it's not expected to make it.

So the state parks folks are talking creativity. Here's a novel approach--reduce fees when use is lower, enticing campers to come in during the off-season and the off-times of the week. If football stadiums can have sponsors, why not parks? How about, "The Budwiser Visitor Center at Twin Harbors Beach" as an example? "Alternative" camping might see a push in growth. Where parks have rental structures like yurts and cabins, non-RVing folks sometimes push up the revenue stream.

Washington's park system is a gem. With a little imagination, maybe locking the gems away behind the bars of "Closed for Lack of Funding" won't be necessary.

Yes, you can -- camping at Mt. Rainier in the winter

When most boondockers think boondocking, they think of the national forests and snowbirding in the warm southwestern deserts.

But if you can't get away for the winter but still want to do some winter camping, Mount Rainer National Park is opening up some areas of the park for RV camping without hookups.

Mounted on the second floor of the administration building, the camera looks toward the Longmire Museum and the road leading up from the Nisqually Entrance, with the National Park Inn hidden behind the trees in the distance. There also are six additional webcams at Paradise and one at Camp Muir. You can find the webcams here.

Extreme cold weather RV camping requires some extra safety precautions and planning to stay both safe and warm. Some tips and adv ice for winter camping can be found here.

Winter snow camping is not for all of us, but Mount Rainier makes it possible to try it out under favorable conditions with help--if needed--near by.
Posted by Staff Report at 3:41 PM No comments: